The roots of OneMind Dogs go back to 2003 when our lead coach Janita Leinonen noticed something terrible; her Border Collie Tekla had suddenly lost her hearing. With help of Tekla, Janita learned to listen. Their determination and love for each other made them not to give up and their efforts evolved into OneMind Dogs method.

Worldwide interest in learning about non-verbal communication with dogs has taken Janita and her partner Jaakko Suoknuuti to training sessions around the globe. In the last few years, demand for OneMind Dogs method has been so great that they have had to turn down many teaching invitations. Janita and Jaakko joined forces with a team of world-leading agility trainers and launched a global site in November 2013. For the 10th anniversary of the method OneMind Dogs wanted to reach across the world and teach people training using natural, nonverbal dog language.

Tekla: The Deaf Dog Who Taught Us How To Listen

Tekla was known as the sweetest, calmest dog around. She had won several champion titles in various agility competitions. But a decade ago when she was six years old, Janita noticed that something was wrong. Tekla stopped running to greet her when she arrived home. She seemed to be ignoring Janita’s commands. Janita knew that this wasn’t like Tekla and took her to the vet. Her worst fears were confirmed – Tekla was totally deaf.

Janita had always trained Tekla using verbal commands. Now, she was faced with a tough choice. Could she really communicate with her deaf dog? If she stopped her daily agility training with her dear friend and partner, Tekla would no doubt get depressed and bored and lose her quality of life. There was only one option: to come up with a new way to communicate.

Janita’s study and experiments with subtle body language and physical signals took her into a whole new world of understanding and communicating with her beloved Border Collie. She learned to understand agility training from her dog`s perspective, and quickly realized that non-verbal commands were a powerful and underexplored communication tool. When other people saw Janita and Tekla working together, they couldn’t believe that Tekla really didn't hear a word. 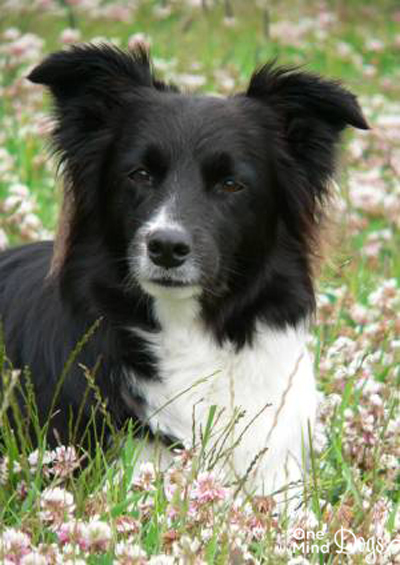 With help of Tekla, Janita learned to listen. Their determination and love for each other made them not to give up and their efforts evolved into OneMind Dogs method. The results spoke for themselves; after Tekla became deaf her achievements continued and even increased. She won several agility triumphs and had a higher percentage of clear rounds than when she could hear! Amongst her greatest achievements were a gold medal from an agility competition against 70 other dogs and a silver medal in the Finnish Championships, when she was a 10 year old deaf grandmother.

Tekla never had bad days; she was full of love and energy through her 15 years of life, and she leaves behind a legacy of OneMind Dogs.

A Universal Language For Dogs

OneMind Dogs method is based on dogs’ natural behavior. Working with Tekla, Janita realized that, prior to her deafness, she had handled Tekla relying far too much on verbal commands and combining them with a confusing body language from dog’s perspective.

Janita also understood that when a dog reads human, the most important message vehicle is the non-verbal communication, not verbal as for humans.

When communicating non-verbal commands correctly according to Tekla´s ‘language’, dogs understand the same message, across the globe. Any dog, from anywhere in the world, will instantly understand OneMind Dogs. It makes sense for the dogs.

We teach OneMind Dogs method to handlers. For the most part, we do not need to teach it to dogs: They already speak the language. It is down to the handler knowing how to speak the dog’s language.

Our instructors travel around the world teaching agility using OneMind Dogs method and techniques. The best demonstration of dogs’ natural ability to read the handler’s correctly-used body language is when Janita randomly selects students’ dogs and within seconds the dogs are carrying out different techniques, naturally and easily, even when they have never practiced them before! The common response of students is: “How an earth my dog can do that without any teaching?”

We Want You to Understand Your Dog

The goal of OneMind Dogs is to help you to understand your dog’s natural behavior. Our biggest passion is to increase the mutual understanding between the handler and the dog, making training more enjoyable for both of you.

In our training sessions, we share more than 20 years’ of expertise in dog training with our students and guide them towards understanding the mind of a dog. What really keeps us motivated is the knowledge that we are changing the concept of dog training. Our students often feel that our method is a breakthrough to a new understanding. During the first sessions their eyes are opened to a new world of possibilities; they say, “finally I understand my dog” or, “I wish I could have known this before.” From there on the dog training continues on a whole new level.

Join Us on Our Journey!

For years, our students have wished that they could continue learning with OneMind Dogs online. Finally it’s possible! Together we can change the face of dog agility training. Join us on our journey and be part of it by helping us to develop the story. Follow us on Facebook and subscribe to our newsletter to receive the latest news about us and our adventures!

Upgrade your membership to premium!