OneMind Dogs lead coach Janita Leinonen is a genuine all-round dog sports expert. Winning the Agility European Open 2013 Championship is a dream come true for Janita. But it´s not just the title which she is excited about – in this interview she reveals why it means so much more.

In recent years Janita has focused on agility, both as a coach and as a competitor.  She is in hot demand for seminars around Europe and the world.

Now, after ten years of teaching the OneMind Dogs methodology in at least 15 countries, Janita is calling in her OneMind Dogs global pack to form an agility community.

"Because the course is always different.  You always face new challenges in agility and often get to do things you’ve never done before. I wouldn't be too exited if I had to run the same course over and over again.

You also have to know how to apply your knowledge in practice. You get to challenge yourself in competitions and on training courses by solving new problems."

Before getting professionally involved in dog training, Janita was studying applied mathematics and working as a restaurant manager.  She originally gave dog training lessons on the side. When more than half of her days were spent dealing with dog training, she decided to give up her former job and became a full-time entrepreneur.

There was massive demand for training classes and she soon had to turn people away.  So Janita solved this problem by creating a ‘train the trainers’ programme for new professional dog trainers.

While she gave classes in several dog sports for many years, there was demand for more and more agility classes and Janita took the decision to concentrate on one sport. As a result Janita now focuses on seminars and coaching only agility classes.

Why was the Agility European Open 2013 Champion title so special for you?

"The European Open was the biggest international agility competition this year, but the most important thing for me was that after a run of real misfortune, I was able to compete and succeed there with my dear Hitti. 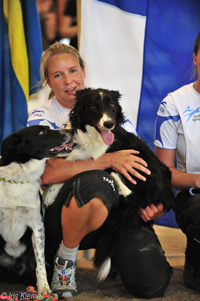 Hitti has had bad luck throughout her life. When she was only one year old, her tendon was torn, and the vets said that she would never be able to do agility. After six months recovering, Hitti started competing and she got the results to compete in the highest class in agility in only two days.

Just the next week after the amazing results we were travelling to Denmark, when suddenly a huge lump appeared on Hitti’s neck. There was a stick in her salivary gland and whole gland had to be surgically removed.

Last autumn I got devastating news. The vets said that Hitti was healthy but I knew that something was wrong with her and I asked them for an MRI. They found something suspicious in the middle of her back and during surgery it was diagnosed to be a muscle tumor.

The vets told me again that agility was over for us. I didn't care about agility at that moment– just as long as she lived.

It took four months and we started to run agility just for fun, without any intentions to compete seriously anymore. I was really surprised that only ten months after the surgery, I was standing on the podium with her in the biggest international competition of this year.

In that moment I was just grateful to be there with my best friend. It was much more than I could ever imagine – all that I had wanted was for her to survive, and to live pain-free."

You have been "living and breathing agility" for many years now.  Where do you get all your ideas from for your training?  How do you come up with new exercises?

"With young or inexperienced dogs I don't plan training courses much in advance.  I react to what is needed in each situation.  All classes are modified according to each dog because every dog and situation is different.  You always face things that need to either be reinforced, or to be dropped.

You also get situations where you need to totally change the way the dog thinks. I am able to interpret the smallest things in the dog's signals or movement and find a new way to practice. If you don't notice these situations early enough, you will face bigger problems in a few weeks or months."

"I wish that dog training skills would be more highly valued: that you could navigate the courses even if you were not a great runner. I do fear however, that agility will become more and more of a sport where the speed of the handler is the key factor on course.

This kind of development will reduce the amount of people involved in agility.  Most dogs love agility.  If the handlers feel that their physical or motor skills are not good enough for the sport, many dogs will be kept away from agility.

You should not be too afraid to try: agility is a sport that you can do despite physical challenges – or, for example, the deafness of a dog. Everyone can set individual goals in the sport - not all have to become World Champions."

Can you share an idea or a moment that was a turning point in the way you think, or is there anything that you find extremely important in agility?

"The absolutely most important thing I ever realized was something that my deaf border collie Tekla taught me: Vocal commands do not matter at all if your other signals contradict them.

I realized that handling agility is much more than just shouting commands, which was the way of handling back then.  This epiphany actually changed my whole life and is the reason why I am here now.

Another important turning point was my visit to Scotland in 2004. During my visit I realized, how to prepare puppies and young dogs for agility. Nowadays our basic training is so functional that they are easily and quickly trained even to champion level.

So there have been two breaking points in my agility career; the first one taught me to understand agility from the dog's point of view and the other one, how to train dogs to become skillful with little training."

What is the best agility memory you have?

"There are so many good memories!  The first time the national anthem was played to honor me and my dog, all the success my trainees have got and I knew I had a huge influence on, the privilege to travel all over the world to meet agility people and make new friends...

But maybe still one moment is above all these. My kennel name is Decathletes. I have had seven border  collie litters since 1997.  In 2010 we won the European Open team competition with Decathletes’ dogs!  There were 88 teams from all over the world and it would have been huge to win it with a Finnish team, but we won it with four Decathletes’ dogs that I had bred - it was something unbelievable!

Team Decathletes also won the EO team competition in 2011.  Our team that year was Zen and three of her puppies. It still sounds amazing and hard to beat."

What do you currently do in your training that are keys to your success?

"I think the key factors are our basic training, understanding the dog's lines and planning the training accordingly.  However you cannot make accurate plans beforehand, because all dogs are individuals and every training session is different.

This way the exercises vary a lot. There is both handling practice and obstacle practice according to what each team needs at that moment.  The versatility of training comes also from clean run training, practicing under different distractions and from a variety of challenges we plan together with our friends and students."

What would be your advice for a beginner in agility?

"Agility is an excellent way to spend time with your dog and to learn how to work as team with your best friend. Agility teaches you a lot about your dog and also about yourself - and you will notice that there is a lot of potential in your dog. Agility can be done just for fun - or you can notice that suddenly you are hooked and start competing actively.

When you start agility, go and see agility competitions and watch the performance of different dog&handler teams.  When you find a team that has a working style you like, just go and ask the handler who their trainer is.  You should try to get quality training right from the beginning because it takes a lot of time and effort to correct faults later."

How was OneMind Dogs founded?

"We noticed that we couldn’t meet demand, especially internationally. Unfortunately we had to cancel dozens of invitations to present. Obviously, we were not happy with the situation and we wanted to spread our word to all agility trainers. Luckily nowadays it is possible through online services.

Our mission is to improve the wellbeing of dogs around the world and to help you understand your dog’s natural behavior. It’s about wordless understanding, the almost magical connection between a dog and a human being.  The dog has so much to give for to its family pack, and we seek to support the team cooperation by practicing together and by our actual dog training.

I have been extremely lucky to be surrounded by excellent dog training professionals and to form our team of OneMind Dogs. Our goal is to form an international agility community, develop agility as a sport and teach everyone, from beginners to experienced agility trainers."

What would say to your child-self if you could meet her now?

"Learn English and Swedish well because all the best books about dogs are written in those languages.  I would also tell her that in the future she will be able to choose being a dog trainer as a profession, so she would know that she doesn't have to spend whole days studying things that she's not interested in. If I had known that I could make a living as a dog trainer, I would have chosen that road from the very beginning.  I would just tell my child-self: "dedicate all your time and effort to things that you are most interested in!"

Do you have a saying or motto that you live your life by?

"Go to each course as if it was the last run you will ever have with your dog."

Subscribe to our newsletter to stay updated with what's new with OneMind Dogs. We'll keep you posted on the latest news and happenings of our journey to go online.