Pirkko Riekki from Oulu, North of Finland, is a dog enthusiast who started agility almost twenty years ago. Pirkko has had a life full of health challenges. Despite the difficulties, she perceives the world positively; she is totally filled with positive attitude!

How did you become an agility enthusiast?

"I have had dogs in the past, but in the 1980s I got a collie, with whom I started to do obedience and go to dog shows. In the early 1990s the breed changed to the slightly smaller Shetland Sheepdog, when I got Kismi. I started agility in mid-90's with Kismi. I represented Oulu Kennel and Agility Club bac then and training took place in Ruskohalli. My first agility contest with Kismi was in January 1995 at the Kajaani dog show, the judge was Tuomo Pajari. These competitions were by no means the last for me and Kismi.  We competed all over Finland, making nice trips with friends. We qualified within couple of years to the highest class.”

What factors have influenced your agility career?

"In the mid seventies I was diagnosed with Hodgkin's lymphoma, and as a result of the treatments my right foot was damaged. The disease returned in 2001, and the treatments had again unfortunate consequences, my left hand is not operating normally. In July 2012, I was diagnosed with cancer for the third time. Surgery and chemotherapy took so much of my strength that I had to leave agility for a year, but since July 2013 I have been able to practice again - treatment permitting and if I have sufficient strength - up to three times a week.”

Tell me something about your agility dogs?

"My first two agility dogs were Shetland sheepdogs Kismi (Fi CH WW-98 Snowglow's Kismet, small class 3 in agility) and Tosca (Fi CH Doing the Test of Taste, small class 2 in agility), who had barky and bouncy running styles. At that time agility was more running together with the dog on the right side and independent performance wasn’t taught to the dog. Nowadays I handle the dog from much further distance and therefore the course walks have a more prominent role when planning the dog’s lines on the course.” 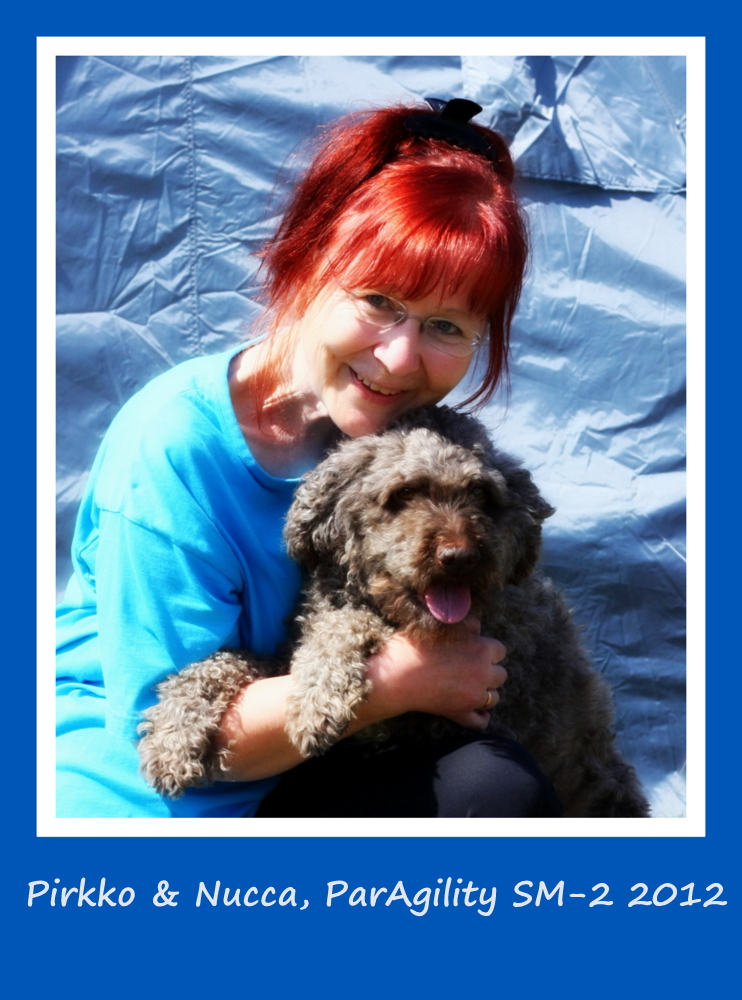 Nucca - the one who taught me how to listen

"I taught the basics of agility to my lagotto romagnolo Nucca (FI CH TK1 Eugenia Jerasa, medium class 3) myself.  At first we practiced at Oulu Dog Club. Training and competing with Nucca was always nice and his potential for independent performance was already there, but "pirkotus" was found only when we started to train at Active dogs."

Nucca is happy, independent, active and enthusiastic about everything Pirkko came up with to try to practice: they qualified for the winner’s class/Finnish class III in FCI obedience and have one Q from highest class (class 3) out of three required for Finnish agility champion title, and he also has Finnish Champion title from dog shows.

"I started to train agility in July 2013 with my seven-year-old Keeshond Saida (Fi Obedinece CH Demicle's Blosom Friend, medium class 3 in agility). Saida has had a two year break from agility and I  have had a one year break. Saida knows the basic skills of agility, and has competed a few years ago, rising quickly to medium class III. Right from our very first training together in Mari Kaplas’s and Mikko Aaltonen’s class we have focused on Saida’s distance work and independent obstacle performance and taught her to read one arm handling.”

In the summer of 2006, Pirkko and Nucca traveled to Holland to para-agility World Championships. They were the first Finnish dog handler team team who participated in this event. The competition had five categories according to impairment and movement, all size classes combined. The competition was for three days, one course per day. Pirkko and Nucca placed second in the overall World Cup results and earned silver medal.

In July 2012, a day before the para-agility National Championships Pirkko was told she had an aggressive cancer. She went on, however, to compete, keeping her head together and won silver medal in the first Finnish para-agility championship competition.

Present agility philosophy and how did you end up to it ? Dreams for the future?

"The realization of what agility can be when I started to take Mari Kaplas’s private lessons on the summer when Mary and Mikko started Active Dogs dog school.”

Pirkko received additional support from Next Level and Tehotiimi (a training program by the OneMind Dogs team) where the trainers were Janita Leinonen, Jaakko Suoknuuti, Mikko Aaltonen and Mari Kaplas.  Now she does not need to worry about not being able to run and she can still continue her wonderful hobby.

Nucca has been the dog who taught Pirkko about dogs in general and about the sport of agility. With Nucca she learned that agility can be fun even though training and competing are goal oriented.  Nucca showed that a dog can be taught certain things.  The same line with emphasis on dog’s technical skills, independence and distance work is continued with Saida.

"Circle of friends has expanded tremendously after starting agility" 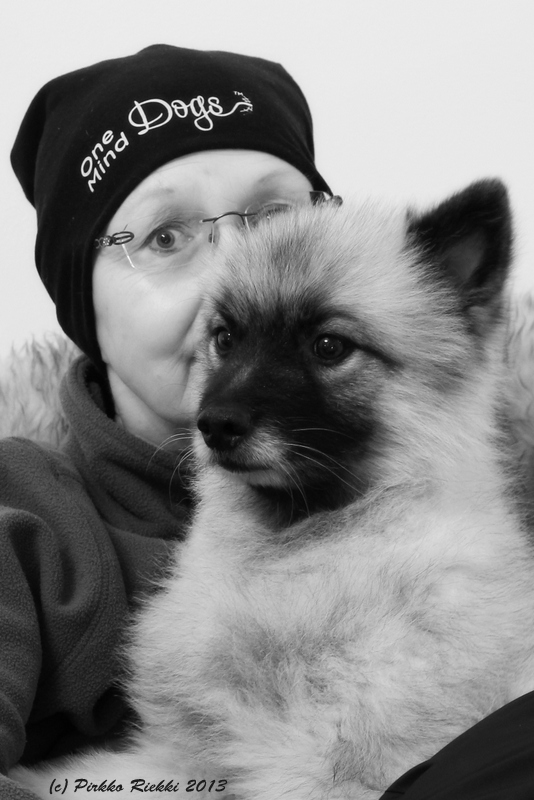 Pirkko believes that both her positive and happy attitude and living with cancer when she was young has changed her attitude towards life to a more positive direction.

Nowadays, Pirkko wants to live to the fullest, enjoying all the nice things what she can do between treatments.

"My big dream is to participate in para-agility National Championships in summer 2014, and before that start competing in medium class 3 with Saida.”

Watch some amazing runs by Pirkko: