In the spotlight with Mari Kaplas

OneMind Dogs coach Mari Kaplas has got a lot of experience in training with dogs of different breeds. The most important thing in agility for Mari is 'the' feeling and having a good time. Mari is also a specialist in in the physical conditioning of dogs. 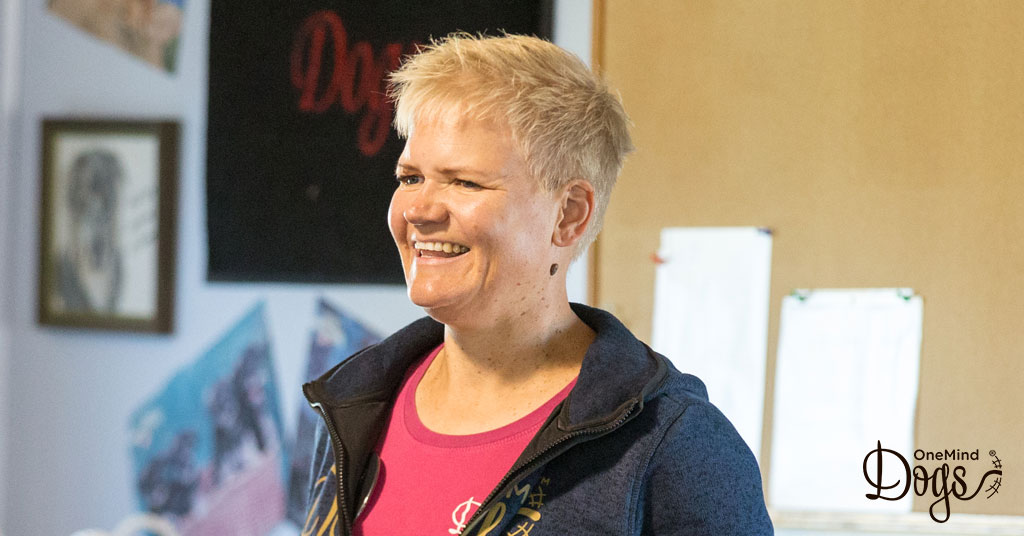 Dogs and dog sports have been part of Mari’s life from a young age. She got her first dog, a Japanese spitz Lippe, when she was twelve years old. Lippe achieved champion and obedience champion titles as a first Japanese spitz in Finland. Mari also tried some agility with Lippe. Mari’s next dog was Belgian shepherd Devi,who achieved in total four champion titles – agility-, obedience-, utility- and show champion- as a first dog in Finland. Devi was also her first actual agility dog.

Mari changed from Belgian shepherds to Australian kelpies. All her kelpies have been agility dogs. Mari has been on the Finnish team with kelpies Cisy and BC six times in total. In addition to her own dogs, Mari has successfully competed with mudi Saima. Currently Mari competes with kelpie BC and border collie Kiia. She also has a kelpie puppy Hu.

One could say that Mary has grown and developed along with agility: Mari was among the first to try out and do agility as soon as it came to Finland in the 1990s. Thus she's seen the growth and development of the sport from the front row. Mari has also been an instructor since her early days in agility, though perhaps initially had more enthusiasm than knowledge and skill. Professional agility came to Mari’s life in 2007, when she and her husband, Mikko Aaltonen, were encouraged by Janita and they decided to try whether they could also make their living with agility.

Mari has gained personal experience of several different breeds and individuals of dogs during her years in dog sports. Australian kelpie seems to be closest to Mari’s heart, even though there are certain kind of challenges in training and competing with them. Kelpies fit Mari’s style of handling very well.

Mari bases her agility handling on the dog performing independently on the obstacles, working away from the handler and reading the course. Mari’s handling lines on course are quite often different from what most handlers choose. That is why Mari usually gets to walk her own path in course walking. Mari mentions that since she cannot run to each point on course together with her dog, she needs to put emphasis on training the dog to be independent. It is natural for a Kelpie to work away from the handler.

Kiia was 3,5 years old and had been doing agility for a couple of years with her previous owner when Mari got her. For the first year Mari tried to change her handling to fit Kiia’s style, but she was not able to move as efficiently as would have been needed to perform successfully. That is why Mari is currently working on changing the thinking patterns of an adult agility dog. Kiia had a very strong handler focus to begin with and Mari has been doing a lot of work to change her focus more to the obstacles.

Mari and Mikko A. have been training together since 2000 even though they first had a distance of 600 kilometers. As a result of their practicing together they have been on the Finnish team for several years, either together or one assisting the other. They have received many medals from Finnish and Nordic Championships. Their absolute best achievement is the World Championship of Mikko and Ava in 2003.

You have been doing agility for quite a long time. How have you maintained your enthusiasm to the sport?

"I am intrigued by agility’s versatility and unpredictability. The fact that you never know what is going to happen on the course keeps me interested. Best of all, however, is training and enjoying together with your dog. Agility provides continuous challenges also for the handler. The enthusiasm is maintained when it is never boring, never finished, and there is always room for improvement." 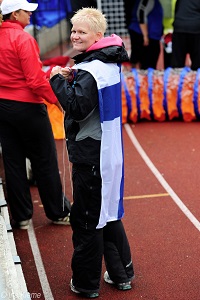 The people who have had the biggest impact on Mari’s agility career are Mikko Aaltonen, Mikko Lehtinen, Janita Leinonen, Jaakko Suoknuuti and Susan Garrett. Mikko L. was coaching Mari and Cisy when they were getting ready for their first World Championships in 2000. Mikko A. taught Mari to understand the basics of the logical handling of the dog. This created a passion to learn even more. Co-operation with Janita and Jaakko started in 2007 when Mari’s understanding of agility moved to the next level with the help of the OneMind Dogs Method. Jaakko’s open-mindedness and creativity have given Mari a lot of thoughts to apply to her handling. Mari still loves to practice with Jaakko since he is the only one who likes analysing the secrets of handling as thoroughly as Mari wants. Susan Garret is the one from whom Mari learned the importance of pacing and braking.

What do you think is important in training?

"I emphasize in both training and teaching that you should find the techniques and handling that fit best for you. The important thing is what feels good, not how something "should" be done."

Mari says that after she had a child, her competition drive has decreased and that is why the atmosphere, and the performance itself, are now more important than the success. Mari likes to try handling that feels nice and ”neat" on the course, even though they might not always be the fastest. Also, finding the right kind of feeling on the course is important.

What things in training are the key to success?

"As an instructor I think that all skills need to be trained and the actual techniques need to be in place, but you must proceed according to the student. The student needs to feel that he is able to do things, and that doing them is nice. I want both handler and the dog to get a feeling of success in training. Also, the objectives must be realistic; one should not aim to the international team right away, but first think about closer target, for example, the transition from the first to second class. You need to have courage to be yourself! By understanding the basics of OneMind Dogs Method the handler can create a handling style that suits both him and his dog.

Another thing that in Mari's view cannot be overemphasized is the dog's body maintenance. Taking care of the physics of the dog is a significant part of agility for her. The basic body condition is maintained by versatile physical exercise together with gymnastic exercises and osteopathic and physical treatments. 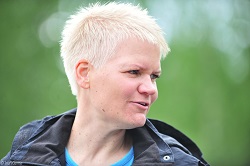 Mari will never compromise on the dog's warm-up and cooling down, but always spends 30 minutes to both of them. This means that each training session requires one extra hour of time in addition to the actual training time. Mari has a principle: if you have no time to warm up and cool down properly, then you won’t be training, either.

Mari wants to have good circumstances when the dog is taken to an agility course. For example she passed a Finnish Open finale once when the rain made the grass field dangerously slippery. Mari’s Kelpie BC is very sensitive to cold. That is why Mari and BC don’t really attend to competition during winter time. Even though the competition hall was warm, it is impossible to have BC warmed up properly outside. Mari can compete with Kiia in winter, as long as the competition arena is warm.

Mari’s aim is that when the dog is retired from agility, it is healthy and fit to be able to enjoy the restful retirement days. For example Cisy ended her competition career at the age of 10 in the Finnish Championships. Saima was also 10 years old when she competed in her last agility competition, the Nordic Championships.