The inspiration to do better can come from many places, a book we read, a post on Facebook, or a competition we witness. Often we may find ourselves inspired by the people we meet in our everyday lives. 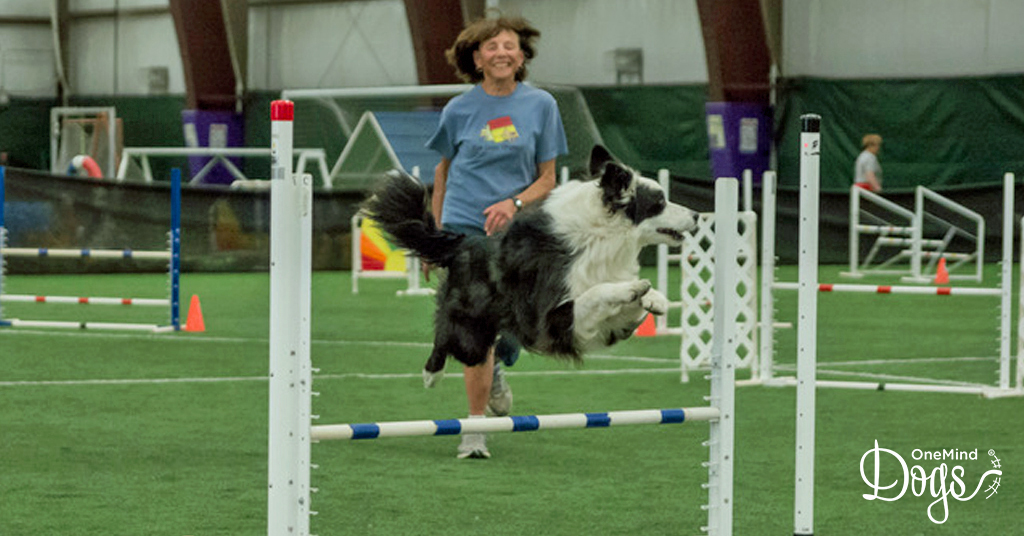 I met Helen Phillips on my very first week of teaching agility classes after moving to Colorado almost 7 years ago. I could not guess her age and I could tell instantly that she had been in the community for some time, as she knew everyone she encountered in the training center. At the end of her leash was a leaping and spinning black and white Border Collie who was ready to go. It was a few weeks into classes before I found out that at the time, Helen was actually in her late 70’s. She had been doing agility for years and owned a local training facility, Ewe R Here Farm. I was told that she had over 40 years of experience with Border Collies and was also a high-level obedience competitor.

For the past 7 years, I have had the pleasure of working with Helen and several of her dogs and I feel like we have both grown together. She has been so open to learning in each and every class and I have found ways to handle sequences that I would have never thought of! Now, at almost 85 years old I see a handler who has learned to see agility from the dog’s perspective and is always wanting to learn more. She has taken the OneMind Dogs method and integrated it into her experience in order to fit her abilities and the needs of her dogs.

When I try to explain to people that the OneMind Dogs methods are not about the Handling Techniques or the moves I often use Helen as an example. As she has learned, you look for the line the dog needs and do what you need to do, or what you physically can do, to put the dog on it.

I wanted to take this opportunity to introduce you all to this amazing woman, so on a cold and snowy mountain afternoon, I took the chance to ask Helen some questions about her experience.

May I ask you how old you are?

How long have you been doing agilty?

I started over 20 years ago with someone teaching at my facility who knew little about how to break down the skills to train them. I was told to take my speedy 13-year-old Border collie, ON LEASH, over the top of the full height A-frame. When he jumped off the top I feared for his safety and quit. I later brought my three obedience dogs down to the training center and began working them. I cringe at what we did. Negative training, yelling at the dogs (for my awful mistakes), jumping them full height on thin rubber mats on full courses. We had no skills at all.

Tell me about your dogs!

The three dogs I started with went on to get their Master Excellent and Master Excellent Jumpers in American Kennel Club. The Master Agility Championship title had just come into existence. They were relatively slow because of their lousy training but we all seemed to have a good time. Ticker, my triple champion, was very close to his MACH when I retired him because his back seemed to be an issue. Split was my autistic BC so his career didn’t last long. He simply couldn’t focus. Nicky, a littermate to Marcus Topps’ marvelous Juice, was so fast that I didn’t have a clue how to handle him. The training was better but way beyond what I could deal with. I have a childhood injury that plagues one ankle and my knee was having problems so I chose to stand in one place and direct him. Sometimes it worked; mostly it didn’t. But we had fun together and he earned his MACH, at age 9. What a day that was! His son, Jolt, was more in sync with me and I was learning. Jolt earned a MACH3 and a PACH and an obedience trial championship. He is now 13.

Currently I’m running Mac, who has been hard for me. He struggles with impulse control and is so over the top about agility that he sometimes goes out on his own. I’ve been told by my instructor that I need to be more timely with my cues and be better at showing him the line. He is not that forgiving of my errors, but he loves running agility. Bonus, who turned 2 in January, is my dream dog. We are having a blast running together and I feel like I finally know what I’m doing. Better yet, he knows what I’m doing and what I want.

How long have you been working with the OneMind Dogs method?

I think it has been about 3 years.

How did you find out about OneMind Dogs?

I train weekly with OneMind Dogs Assistant Coach Nicole Levesque and OneMind Dogs Instructor Morganne Wagoner-Perry. Both are local OneMind Dogs experts in my opinion and have continued to insist that I handle my dogs consistently. They help me adapt the OneMind Dogs method to what I can physically handle. When I have the chance to watch them, their handling is pure inspiration.

What has been your biggest challenge running the dogs you run now?

My inability to run, whether it be because of an aching knee or ankle or simply lack of stamina and not enough speed to keep up with my fast BC’s. At the same time, I accept the challenge of finding the way I can make it work. I often watch Sabine Westhauber’s videos and think, “If she can do it so can I”. As we age, our reflexes slow. It’s a continuing battle not the let the aging process get the best of me!

How has OneMind Dogs helped you battle the aging process?

So many of the Techniques I’ve learned are physically easier for me. How can you compare the old post turn, quite painful on the bad ankle, with a lap turn which causes no pain and is so smooth? Just learning to keep connected, handle lines, and throw in the occasional blind cross makes it much better. I now understand what I’m doing right or wrong when I’m on course. I truly am beginning to feel like I’m becoming a good handler. Too bad it has taken 84 years!

Can you share what your biggest Aha moment was?

I don’t catch on quickly. I have to work with something for a while until it all begins to gel for me. If I were to point to one particular moment it had to be when I finally realized how much difference connection makes to my dogs and why, over the years, we had so many dropped bars and off courses.

The other AHA moments come when I execute what I previously thought impossible and realize it works!! Nothing feels better than that.

What are your goals for both of the dogs you are running now?

To stay healthy and sound is what I wish for them and myself and to continue to improve as a team. I have a friend occasionally running Mac for me and I would like to see him get a MACH, even if it takes someone else to do it. Bonus is doing so well, I secretly harbor a wish that maybe we could make it to AKC nationals. I’ll be on the dark side of 85 but I think we can do it.

Is there any advice you have for the rest of us? Something you have learned along the way to help us be more aware or more mindful?

I hear people talk about being so old when they’re just 55 or 60. POSH! Don’t think that way. As they say, age is just a number. It’s not always easy but can still be great if you just work at it a little. Use agility to enjoy your dogs and to keep your own body and brain alert and driving ahead. You’re not dead until you die. Is that profound or what!!

Words to live by Helen!