What plays the single biggest role in your agility game? Your mind. Before mental training, Janita Leinonen, inventor of the OneMind Dogs Method, couldn’t control her inner critic. In this interview she speaks on how mental training transformed not only her agility game, but her entire life. 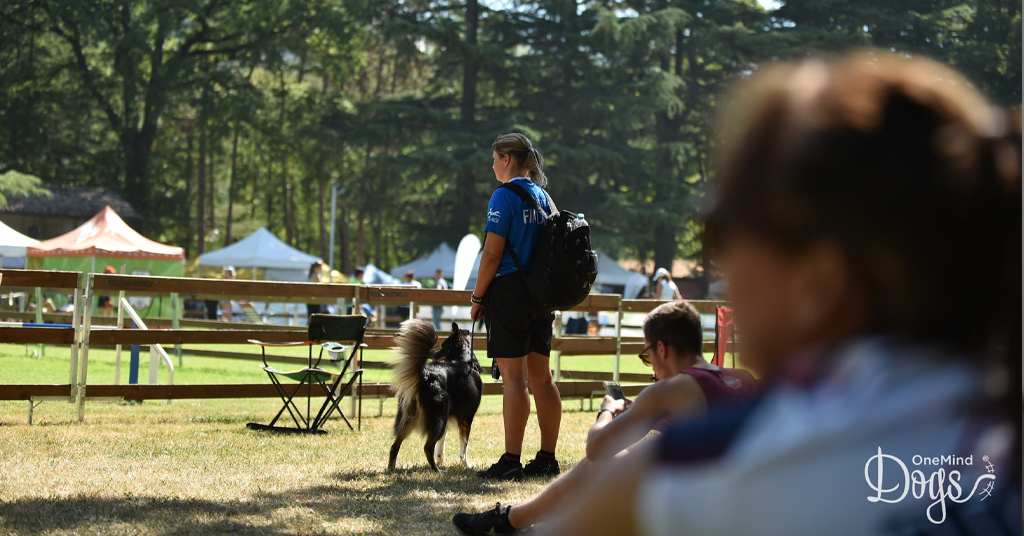 What is mental training?

Janita attributes her success in agility largely to her mental training. “Mental training is learning to recognize your own limiting beliefs and inner speech and learn to control them. It allows you to choose your self-image you run with in trials and enables you to do your optimal performance, no matter how you feel or what have happened to you yesterday, last week or last month.”

Janita spoke about a time when she used mental training to overcome self deprecating thoughts before European Open tryouts. She explained that Fu had just recovered from an injury where she’s had five weeks off from agility.

“One week before EO tryouts we started to train, two times with lower bars. My self-image was like a little black raisin and the fortune teller and critic inside my head went crazy saying things like, "Fu can't get over the high bars after that long break, why bother to go - just waste of time to even try...". Luckily I had mental tools for that. I did a "self-image exercise", went to EO tryouts and won them with Fu.”

Janita explains, “Without the mental tools, I would have gone back to that same formula of failure I had had years ago.” So what exactly was that ‘formula of failure’ Janita had experienced before mental training?

“Before the runs I predicted failure and told stories about why I can't do well today. During the run I was unsure, and after the failure I was sad, frustrated, and angry at myself for being so stupid and repeating the same mistakes year after year.”

Janita explains the problem was that she was unaware of her inner speech. She goes on to say, “Afterwards when I started to recognize my thoughts during the trial days, I could have written a book of the harmful thoughts I had had for years:

What was the biggest struggle keeping Janita from getting clean runs?

“I didn't believe I could do it. Instead of focusing what I wanted to happen during the run, I tried to avoid the mistakes which obviously led to unusual mistakes, because I didn't handle the same way I trained. I often just waited the mistake to happen and when it did I got a proof supporting my limiting beliefs: "I knew it, every time something happens to me." It was like self-fulfilling prophecy.”

Before mental training, Janita’s inner critic was extremely hard on her. “I punished myself mentally for days, sometimes for weeks after a failure in big trials."

Thankfully, Janita’s unhealthy thoughts came to a stop in 2004 when she started working with a mental coach. Her whole perspective on competitions and attitude towards them changed for the better. "I transfered my thoughts from other people to my dogs. They give me their everything in every fun, why wouldn't I give my all to them. I decided that any of my dogs doesn't ever have to tell their friend after the run that his handler didn't trust him, had decided beforehand where we fail or wouldn't have tried her best until the end. I want to be a handler worth of my dogs. Nowadays when I enter the ring I remind myself that any run can be our last one with that dog, you never know what is going to happen either to you or your dog. I'm just enjoying of all runs I'm allowed to run with my dogs. The results don't define my feelings anymore.”

After mental training, how has Janita’s mental routine changed before, during, and after her runs?

“Before the run I just go through my handling plan, what I have to remember and do on a course to be the best possible teammate for my dog. During the run I don't think anything, I trust my automation and subconscious mind to take over and do the handling. It's like driving a car. You are not really aware of all the things you do while driving, but if you try to do everything consciously, you get slow in what you do.”

The idea of letting go during a run and not actually thinking of anything can be tricky to master. Why is this so important?

“Our conscious mind can handle only 50 bits of information in a second. Our subconscious mind can handle 11 million bits in one second. If you are thinking something in a course you are like a slow version of yourself and late all the time. If you judge yourself during the run "oh, I was late on that", "damn, he hit the bar", "I wonder if we got a refusal from that", "my gosh that was a wide turn", you are not concentrated on the present. What happened, it already happened, you can't change it anyway anymore, so why bother thinking about it? Thinking things like that gets you away from automation to your conscious mind. Many times the actual mistake happens a few obstacles after these thoughts because instead of focusing on the present, your thoughts are in a past and there is not that much room in conscious mind to process several things simultaneously.”

In order to learn and grow from our mistakes, we have to analyze our runs at some point. So when should we do that? Janita’s principle is that “when your dog has a toy in his mouth, it's time to analyze what you did and if there was something you can do better or different next time.”

Today, Janita’s competition reflection process is worlds different from what she described earlier. “Learning to transfer mistakes to clean runs in my brains have had an enormous influence to my ability to manage my feelings after trials. Instead of going through the mistakes I made over and over again thousand times, I have learned to change my thoughts for more constructive thinking. Honestly I don't remember anymore couple of hours after the runs if I run clean or not. If my friend calls me after trials and asks how did I do, I don't remember what kind of mistakes there were, because I have already turned all runs to clean runs in my brain. A remarkable difference compared to where I started years ago!”

While Janita has made incredible achievements in agility since starting mental training including multiple gold medals in national and world level competitions, one of the most incredible elements of mental training is the ability it has to change your entire life. “Earlier I got upset about people's comments or updates online or in trials and I couldn't control my emotions. After learning about different world views and beliefs, I'm much calmer and my life is so much easier without having to react to any other people's drama. It gives a feeling of freedom when no-one else can affect my performance or my emotions, I'm fully responsible and in control of those myself.”

Janita explains that mental training has even greatly impacted her relationship with her spouse, especially in dealing with disagreements. "After learning to give different meanings for my reactions, I don't get so emotional anymore if my spouse says or does something that earlier would have hurt my feelings."

Your mind will either set you free or hold you back - and you have the power to choose which one of those will happen. “Mental training is like learning a new language, if you don't use it, you'll forget it. You have to do exercises to maintain the skills and not go back to your old way.”

If you’re ready to gain control over your mental state and change your life, Janita can help you on starting this interestesting journey.