Riina And Zoi Are On Their Way To European Open

One of the world’s biggest international agility championships, FCI Agility European Open 2015, starts tomorrow in Rieden, Germany. Despite of its name, there are teams all over the world taking part in the event – and of course many of them are OneMind Dogs handlers!

One of them is Riina Koskelma who recently won bronze at the Finnish Agility Championships with her bordercollie Zoi. 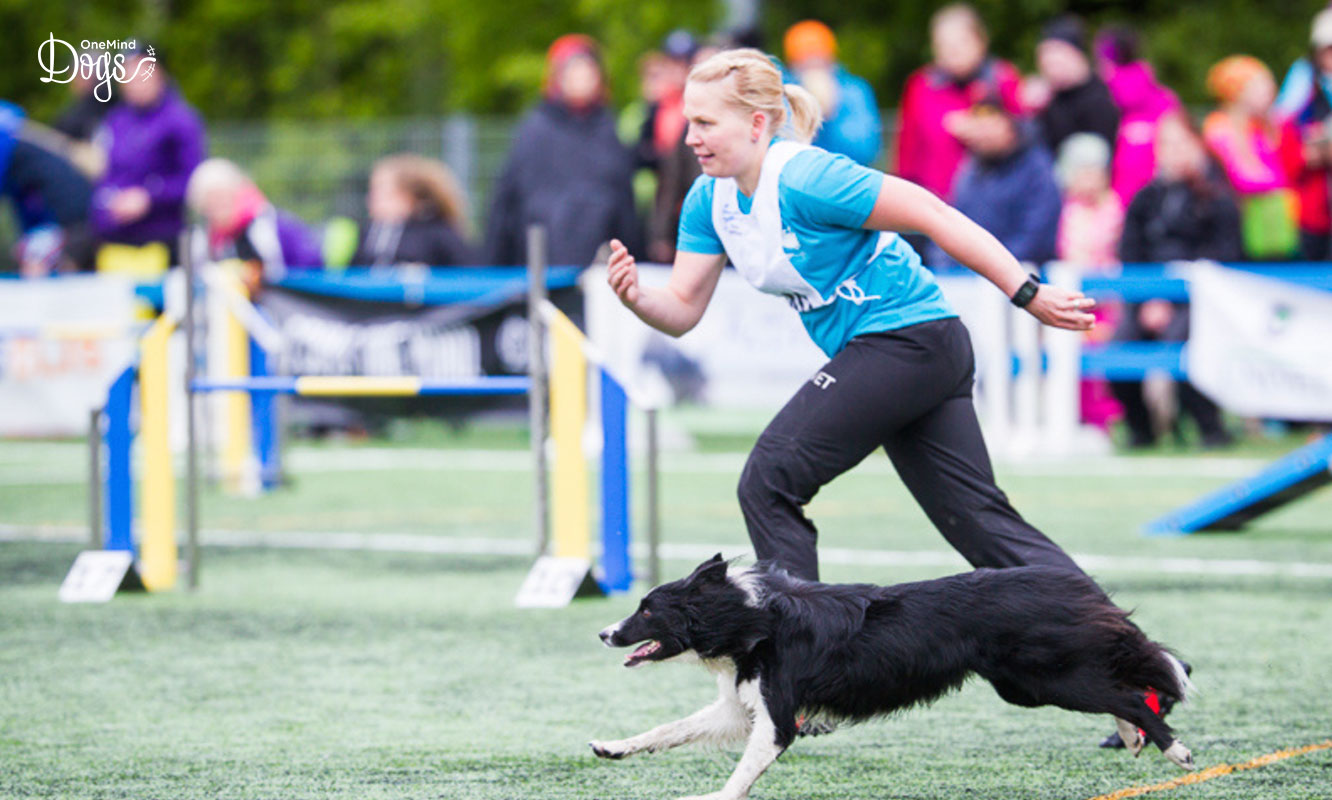 European Open is competed on four different courses running at the same time. It is one of the most demanding competitions in the world and the national teams sent by different countries are bigger than at the FCI World Championships.

Riina has noticed that success requires a balance between being relaxed and anxious:

"At the Finnish Agility Championships being relaxed and believing in myself worked out well and it was rewarded. At the Finnish National Team Tryouts I had not had the time to clear my head of the championship success. That lead to me being too comfortable and making mistakes on the course because I was not anxious at all. I’m at the beginning of developing the mental side and it is one of the most important things for me to focus on during the next season. Zoi doesn’t get nervous but will react to my emotions and especially me being anxious."

"When Zoi and I go to the start line our goal is to make a good run and trust our own skills. Success comes with it. And because Zoi gives me her everything, it is my goal to do the same for her! Most beautiful memories are made together!"

Championships are the most important events of the year for handlers. Reaching for those important goals may cause anxiety that can sometimes be almost paralyzing. An article about relieving competition anxiety is available free of charge for everyone registered on our website. Riina is less anxious nowadays:

"The mental side of competing and controlling my mind have developed gradually. At my first national team tryouts I was so anxious that I was unable to talk. Nowadays the situation is not as bad ;) "

"My mental preparation skills have improved mostly within the two past years. The most important thing I’ve learned is that you need “believe in your own thing”. You need to believe in knowing your own dog and trust the dog and yourself. It’s not self evident that you get to do this sport. You never know when everything is going to end. That’s why it’s important to enjoy every moment. This has been the biggest thing for me when preparing to the championships this year and the last. Last year, a week before the Finnish Championships, Zoi had an accident that fortunately did not stop us from taking part in the competition, but it really made me think. This spring Zoi was on sick leave for two months but got well back into shape."

A good foundation makes it easier to trust

Riina ended up training using the OneMind Dogs Method in May 2009 when she participated to a seminar by the leading OneMind Dogs Coaches Jaakko Suoknuuti and Janita Leinonen for the first time:

"After that seminar I made a conscious choice to have more of this training. Zoi has been trained according to the OneMind Dogs Method from a puppy. OneMind Dogs means a lot to me! I have OneMind Dogs to thank for everything I’ve achieved with Saga and Zoi. I’ve regularly attended Janita’s, Jaakko’s and Elina’s (Jänesniemi) seminars. I like the fact that they all have their own way of approaching things. Each seminar has been fruitful in one way or another and it’s nice to go home and do my home work. They have all given me so much, not just in agility but also guidance for the mental game."

OneMind Dogs wishes all European Open competitors happy and unforgettable moments! Trust your dog and believe in yourself, like Riina does:

"My goals have not changed after gaining success. I just have more faith in them. When you’ve once made it at a “tight spot” you don’t need to think whether you can or not. You can just focus on what’s essential."