OneMind Dogs fan Liza Buckner is heading to World Agility Open on May 19-21 with WAO team USA. Liza will be competing with her little rescue dog, Jefe. We asked Liza what it’s like to run agility with a rescue dog using the OneMind Dogs Method, and what her WAO plans are. 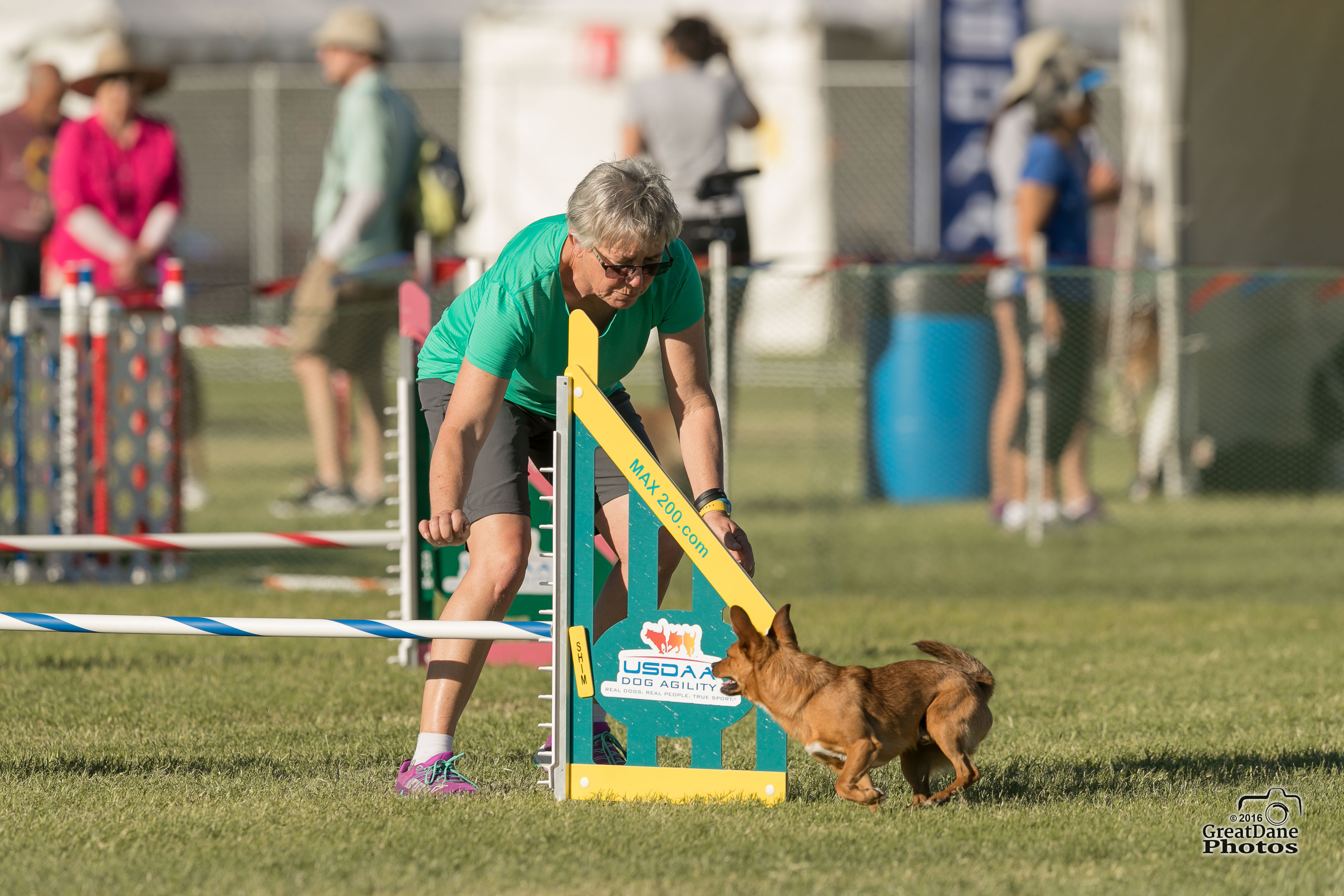 What do you know about your dog’s background?

Well, that is a really good story. Jefe was literally dug out from under a house. Agility instructor Anne Kajava in California rescued the litter from under the farm workers barracks on a farm where Anne teaches agility. The mother had been blocked from getting back to her babies. Anne and her students dug them out at the age of four and a half weeks and they had been without their mother for four days! They were covered in fleas, filthy and starving. She fostered them and then posted a notice on Facebook. I was teaching agility nearly full time at that point and thought to myself, “I need to learn to run a little dog. I’ll take that one”. It was a spur of the moment decision that would change my life! I met the mother, who looked a little like a poodle and somewhat like a schnauzer. No one knows who the dad was. Jefe and his brother are smooth coated and his two sisters are rough coated.

What’s Jefe’s personality like and how does it play out in agility?

I don’t believe that Jefe knows that he is small. I’ve never had a little dog before, so I treated him like a big dog and he grew up with my two large male aussies. He is one of the most confident dogs I have ever known. There is not much that shakes him up. He loves to play agility with me and he certainly seems to think that he is very good at it. His training started from the beginning with OneMind Dogs foundation and he has better obstacle focus than my six year old aussie. Many people who watch him run say that he runs like a big dog. He is very cuddly and LOVES to be petted and rubbed. He is also quiet and socially good with other dogs. I personally dislike the tendency for people who have little dogs to let them be snarky and yappy, so I’m grateful that Jefe is confident enough that he doesn’t need to do that. There is something very engaging about him and he collects fans wherever he goes. Everyone who meets him says that his name is perfect. It means “The Boss”.

Is agility any different with rescue dogs?

I think that this depends entirely on the individual dog. Whether a rescue or a highly prized purebred, some dogs have traumas during fear periods that affect them and some dogs are too sensitive to endure a highly charged environment like agility trials. Some people say that rescues are always “grateful” that they have been rescued. I don’t know if this is the case or not, but I certainly think that when faced with stress, Jefe figures that he has had real “third world problems” and whatever he is facing is a piece of cake in comparison.

Are there any particular challenges with rescues and agility?

The only real issue that I can see with rescues vs. purchased dogs is that in the States all rescued dogs that go through agencies are spayed and neutered at a very young age. This is not a deal breaker, but research now shows us that pediatric spay/neuter delays the closing of growth plates in dogs. This results in the dogs growing taller and somewhat out of proportion to what they would be like if their hormones were left intact until physical maturity. For your average dog this is no problem at all, but if the dog is going to have a long, demanding agility career it simply means that the owner needs to understand that they need to take extra care with supplements, bodywork and other ways of supporting their canine athlete. I was lucky enough to get Jefe intact and I feel strongly about dogs needing all of their hormones, so he has been vasectomized. He is sterile, but still intact, so that he gets to keep all of his hormones. He keeps all of his rude behaviors around girl dogs too, but that is what a leash is for!

How does the OneMind Dogs Method work with rescue dogs?

This method works the same with all dogs because it is based on what the dog naturally understands. If anything, the OneMind Dogs Method might be even better for a rescue, especially if they have confidence issues. One of the things that I admire the most about all of the OneMind Dogs Coaches that I have worked with is that when they encounter a problem, they stop and examine the situation from the dog’s perspective. They figure out what the dog is seeing or perceiving and approach a solution from that angle. You can only imagine how comforting this would be to you if you were a dog that had a scary start in life. “Oh, this human is trying to understand me! What a wonderful surprise!“

What would you say to other people who are considering agility with their rescue dogs?

I would say absolutely give it a try. I teach agility for a living and I have many clients who come to me with fearful dogs because they want to give them confidence. I’ve seen some of them blossom and some really don’t like certain parts of the game, for example the see saw. Well, then, we do jumps and tunnels and they don’t need to do the see saw! My advice is to find a knowledgeable and kind teacher and NEVER do something with your dog that you feel will frighten him just because a teacher tells you to. You are your dog’s advocate and agility is just a lovely game that we play with our best friend. Even at the highest level of competition, if that isn’t the essence of what you are doing, it’s not the right thing for you or your dog.

What are your goals for WAO?

My main goal is to be the best possible teammate for Jefe. I also want to do my best to be a good teammate for Team USA. This will be the first international competition for both of us and Jefe is still very young. A big competition like this brings a whole new level of pressure on one’s mental game, so I have to be very careful about my goals. I have talked with Vappu Alatalo about this and she has helped me a lot. Her articles on the OneMind Dogs website on Mental Training are invaluable and I highly recommend them. My goals must be performance based rather than outcome based. My performance is the only thing that I have any control over, so I must focus on doing the best possible job that I can and leave the outcome out of it. When I visualize my runs in the Netherlands, I see myself making a good plan, working my 3Cs, giving Jefe his information early and clearly and running as fast as my physical body allows. When I visualize this, I get goose bumps because I know that I can do this much. This may lead to placements and it may not, but I cannot focus on that because that leads me into comparing, which leads me into self-doubt, which slows me down. Better to focus on doing the best that I can for myself, my wonderful little dog, and my team. I’m honored to have earned a spot on the team and am excited to have this opportunity to compete at such a high level. Everything else is merely a lovely bonus. So, I must focus on being as prepared as possible and then, as my teammates say, “Giddy UP!”

I would just like to add one thing for those readers who are new to OneMind Dogs. I frequently have new students come to me because they know that I study with OneMind Dogs Coaches and they want me to teach them the “fancy moves”. I love the techniques and enjoy teaching them, but I urge people to look deeper than that. The thirty techniques are great tools, but they are not the heart and soul of this system. If you look at the Ten Commandments of Agility that Janita Leinonen composed, there is no place where it says that you must use certain techniques. The heart and soul of this system are the Ten Commandments. If you look to those statements to guide your agility trialing and training with your dog, you can’t possibly go wrong!

OneMind Dogs Coaches and Assistant Coaches Jen Pinder, Jessica Ajoux and Perry DeWitt are also in the 2017 USA WAO team. OneMind Dogs wishes each of them the best of luck!

The 10 Commandments Of Agility

The 10 Commandments Of Agility

How Mental Training Made All the Difference For Liza Buckner

How Mental Training Made All the Difference For Liza Buckner