Janita Leinonen, the leading OneMind Dogs Coach got a first hand experience with canine anti-doping testing last summer. She wrote an article about the things that went through her mind during the testing process and while waiting for the test results.

"I'm facing the final course of the Finnish Championships. My best friend, Tuulia Liuhto just finished the course and took the lead. I feel good all over, but I still need to concentrate on my own performance. We have a clean run, and they announce that we took the first two places with Tuulia. We run a victory lap around the course. When we come back, there are two women I've never seen before, waiting next to the course and walking towards us. "Hello, we are anti-doping officials, Fu and Pirtu have been selected for a doping test. We will follow your dogs, until we can get samples. " I start to panic, do I have the time to play with Fu, am I allowed to give her water, what about cooling down, and we were supposed to have our photographs taken...?"

Canine anti-doping rules came into effect in all trials and competitions sanctioned by the Finnish Kennel Club in the beginning of 2007. The aim of these rules is to protect the animals; if a dog is sick and/or under medication, it should not be competing. The aim is to provide the dog with sufficient time to recover from an illness. The second aim is to prevent the artificial improvement or maintenance of a dog's performance.

Even if the drug itself is no longer present in the test, there might still be residues left. Because of this, the washout periods are often much longer than the half-life of the drugs in the dog's system would require. For the same reason, chocolate gives a positive result for caffeine in a doping test, as theobromine produces a metabolic residue similar to caffeine. When drug residues are concerned, it is not significant whether they had an effect on the dog's performance, or not. Drug residues not related to the organism are not allowed in the blood, urine, hair or other samples taken from a dog during a dog event (zero tolerance).

There are three reasons why a dog may be tested:

The doping control officer is responsible for checking that the correct dog comes in for sampling, and the ID marking of the dog is checked, to ensure its identity. The doping control officer follows and monitors the dog to be tested, until a sample has been obtained. A urine sample is collected directly into the sample jar. Four hours are reserved for getting the sample, starting from the moment the dog enters the sampling area.

A dog tested positive for doping will be suspended from competitions immediately after the result has been confirmed, and all results / placements the dog received in the competition will be canceled.

Anti-doping violations can be divided into four categories, and the sanctions depend on how serious the violation is. Suspensions due to violations apply to the dog, that was tested positive, its owner, and their other dogs.

I kept wondering, how hard it would be to get a sample, could I get the jar to the right position, or would Fu stand up the second she notice the jar underneath her. Both Fu and Pirtu have been trained to go on command, so collecting the samples was extremely easy, and over in a matter of minutes. Neither one of the dogs reacted to us diving behind their rear ends with a jar, and both provided a sufficient sample on one go.

After this, we continued by filling the forms and signing papers, stating that the dogs have not been medicated during the last two weeks. The sample was divided into tubes A and B, and the tubes were sealed. The A sample is always examined first. If it turns out positive, the B sample may be examined, if so required, within a certain time period. The samples are sent to the same laboratory, that examines the samples of human athletes. Since it is the Finnish Kennel Club that pays for the sampling, the laboratory sends the results to the FKC, and they forward the results to the owner.

When I came home, the thoughts started haunting me; what if there is something wrong in the sample, and I'll get suspended? Hitti couldn't run in the championships as she was on medication, what if Hitti has dropped a pill or left it uneaten, and Fu has eaten it? How much of the drug remains in the dog's bowl, when the drug is given together with food, and Fu likes to lick Hitti's bowl after they've eaten? Is there a chance, that my parents might have given Fu a bit of chocolate biscuit, when visiting? What if Fu has eaten something while outside, or licked a chocolate bar wrapper? The dog biscuits we feed, they are not flavored with chocolate, are they? We live in between two horse stables, what if Fu has eaten horse manure, and the horse was on medication? The recovery products we give to our dogs, can we be certain they contain nothing, that could produce a positive result? During the summer, our car doors are open wide and our dogs are in metal crates, what if a passer-by has tossed them a liver-flavored painkiller?

Even though I knew, I had not given Fu any medication, waiting for the results was killing me. It would be pretty embarassing to be convicted of an anti-doping violation, just because I unwittingly gave my dog something that tests positive for drugs in a doping test. It took altogether nine weeks before we could breathe again, when we got mail saying both Fu and Pirtu had tested negative for drugs. 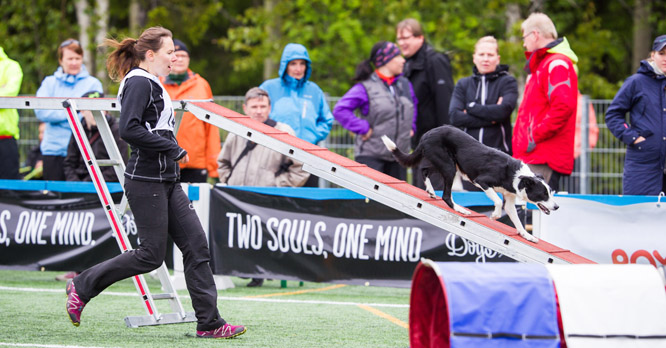 Animal anti-doping regulation may sound like a good idea, at first. However, there is a great risk, that it leads to dogs going unmedicated, in the fear of doping tests. For example, a dog gets an eye infection or a wound a couple of weeks before a top level competition. It requires 10 days of eye drops, or a course of antibiotics. The washout period for these drugs is 7 days. The eye infection is over, and the wound has healed in two weeks, but the dog has been on medication, so it can't compete, even if it is healthy, and the drug has no properties that would improve its performance. Dogs are left unmedicated, so that they may compete, and this is no longer in the best interest of the dog.

A few days before the Finnish Championships one of the top ranking favorites had a nasty accident, when it was bitten by a snake. The dog was put on pain medication, that has a washout time of 28 days. A couple of weeks after the Finnish Championships, it was time for the team qualifiers, and the dog in question was not allowed to compete there, either, even though it was perfectly healthy. A few days on painkillers prevented the dog from competing for an entire month. It is easy for an outsider to think so what, it's only a competition. But the question is, is it really necessary to stop a perfectly healthy dog from competing, because of something that happened two weeks or a month earlier?

If a doping test result is positive, there's nothing to explain, a positive is a positive no matter what the cause. It scares me to think, how the result may depend on such small details. I hope I will never have to go through that again!

The normative minimum washout periods for dogs can be found here.